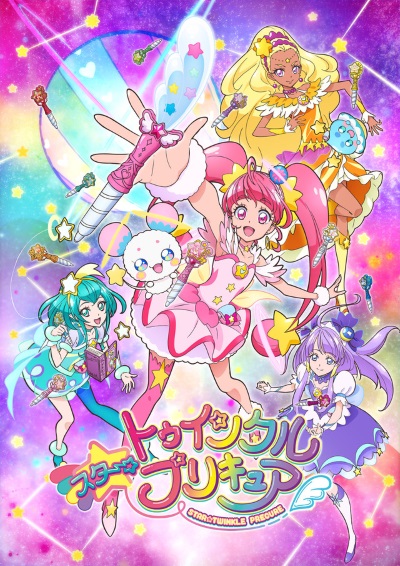 Plot Summary: For the first time in the PreCure TV series' 16-year history, the story of Star☆Twinkle PreCure is set in outer space. It begins when the protagonist Hikaru Hoshina, who is in her second grade at junior high, meets a mysterious creature named Fuwa and two aliens, Lala Hagoromo and Prunce. They have just arrived at the earth. Hikaru learns that "Star Princesses of The 12 Star Signs," who kept the balance of the universe in the the scared are of the Star Sky World far from the earth, were attacked by someone and have been scattered as the 12 "Princess Star Color Pen." Then Fuwa is attacked by Notoraider who seeks to rule the universe, and as Hikaru wants to save the baby fairy, she transforms into PreCure. She deicides to begin a space adventure to collect the "Princess Star Color Pen" and raise Fuwa, who has the key to revive the Princesses.